Differences Between the Viola and Violin

Differences Between the Viola and Violin

Violins and violas are magnificent instruments which you can hear in classical music, some pop songs, and other genres of music. Most people can easily recognize the differences between a viola and violin when the instruments are compared up-close, but when placed in an orchestra setting on-stage, most people cannot tell the difference. Only educated musicians know the real difference between the viola vs. violin.

If you love classical music, or if you just want to understand the differences between these instruments, we are here to provide you with the knowledge to discern the main characteristics of these beautiful instruments, both their similarities and their differences.

While the basic differences between the viola and violin can be boiled down into the table above, this is not a thorough enough explanation of the differences. By simply saying that violas are much larger and that they sound differently, we’re not saying anything wrong, but that’s just the tip of the iceberg.

We’re going to talk about the difference in strings, different tunings, note range, size, sound, playing style, bridge, names, and much, much more. We’ll start with an overview of the violin and viola separately so that you can grasp their differences and similarities more easily.

The violin is a traditional Italian wooden stringed instrument that is the archetype of the entire violin family. It produces a beautiful, high-pitched sound, and it’s considered to be one of the hardest instruments to play.

The first violin was crafted in Italy at the beginning of the 16th century, and it was used in its original state and form for two hundred years before it received significant modifications in its design and form. The violin trend caught on throughout Europe, and halls were filled with violin music shortly after its arrival.

The 18th and the 19th centuries are known for violin-oriented music – it’s safe to say that musicians those days preferred the sound of this magnificent little instrument. Some of the most famous violin brands created back then were Stradivari, Guarneri, Amati, Brescia, and Cremona.

The violin was so famous that it was used as a model for many other instruments. Educated musicians and teachers from Renaissance Italy invented the term violin family (violas da braccio) so that it could be easily distinguished from the viola family (violas da gamba). Since then, these families have merged, forming the list of the most used violin-based instruments:

Violin is traditionally a 4 Stringed instrument, but you can also see it in the variation where it has 5 strings. Usually, the tuning of these strings is the same as the traditional bass guitar – E, A, D, G. Originally, violinist prefer synthetic strings over those steel strings. The “standard E” tuning is a matter of preference, but there are various others, including the violin open tuning, standard A, standard C, and many more.

Describing a sound with words is very hard, mainly because everyone perceives music differently. It’s hard to imagine that there are two people who can experience a song in the same way, with the same chills, thrill, and enthusiasm, but we could try to explain the tone in several situations:

It doesn’t matter what genre it is, or what function the violin has – you can’t ignore the sound of the violin in a song. Even if it’s just an easy melody, you will hear it, and you will remember it because of its higher pitch.

Did you ever hear of the phrase “And the world’s smallest violin played”? It often portrays a funeral or intense depression. The violin can literally weep when you play it, and that’s the beauty of it.

Apart from classical music, the violin is often used in various electronic and pop music, even heavy metal. In these settings, the violin sounds pretty epic – fast-paced rhythms and high-pitched squeals sound epic all the way.

Originally, the violin came from Italy where it got the name violin. Nowadays there are different names which people use to refer to the violin, such as Violon (French), Geige (Germany), Violina (Balkan States), Keman (Turkey), and Fiddle (when used in folk music genres). There’s no real significance in naming it differently apart from the fact that you might hear people from various nationalities calling the violin by a different name.

The violin became famous in the 16th century when it dominated the classical music scene. It was used to create mellow melodies when played in rhythm sections and to create a vivid atmosphere when it was used in the lead section, but that’s not all the violin can be used for.

The viola is often mistaken for the violin by uneducated musicians and people who do not play any instruments. Even though it’s somewhat larger, it looks very similar, and the sound can only be discerned from that of a violin by people who know these instruments well.

The vola is very important to music in general – orchestras worldwide combine the two instruments in their performances, and it’s hard to imagine one without the other in classical music.

The viola was invented by the Italians (as was the violin), and it was called many different names before everyone agreed that it could simply be referred to as the viola. In the beginning, the term “Da Braccio” was often placed right next to viola, which literally means “of the arm.” Another Italian term for Viola was “Brazzo” (probably in tight correlation with “Da Braccio”), which the Germans soon adopted to create their own name “Bratsche”.

Even though the viola can take the lead with ease, most orchestras employ the viola in accompaniment parts. The parts that are often referred to as those “inner voices” are played by viola and second violins in classical music.

One of the main reasons why the viola got its own family name is because it was hard to distinguish from the violin. Even though “Da Braccio” was used for violas at the beginning, it actually pointed towards violins soon enough – the viola family got renamed to “Da Gamba”.

Viola’s strings are thicker when compared to the violin – this is also one of the main reasons why the sound is so much deeper. The tuning is also different – most violas are tuned in the standard A tuning with the strings being: A, D, G, C compared with the violin’s E, A, D, G. As with the violin, the viola is also a 4-stringed instrument.

The viola is called many names throughout the world, even though the regular “viola” is the most common. For instance, Frenchmen call it Alto and Cinquiesme, Germans call it Bratsche, and such. Just as the violin has different names, the viola’s different names all refer to the same instrument.

Before the twentieth century, the viola was used to fill the gaps in harmonies, and there were not many melodic parts for it. The viola’s lines were often identical to those of other stringed instruments and it was played in unison with it.

Not long after the beginning of the 20th century, various composers and performers began their work with solo viola songs, parts, and roles. The viola received a massive boost to its role and versatility, and the trend caught on pretty quickly.

Some of the famous viola players that took part in the revolution of the viola’s role are Arthur Bliss, Benjamin dale, Ralph Williams, and others (fun fact – these three gentlemen wrote the theme song of Tetris).

Main Differences between Viola and Violin

We’ve already compared most aspects that make violin and viola different, so let’s review them in one place:

The type of strings that an instrument uses will affect various performance factors. For instance, the playing style will be different if the strings are hard and thick, the sound will be deeper if they’re dense, and you will have little options when it comes to tuning.

Synthetic strings are easier to strum, they’re easier to press, and they allow for a wide range of tunings. This is one of the main factors that contribute to the violin’s sound.

The material varies from model to model, but it’s often steel. Viola’s strings are very thick, and they sound deeper when compared to the violin.

Location in the Orchestra 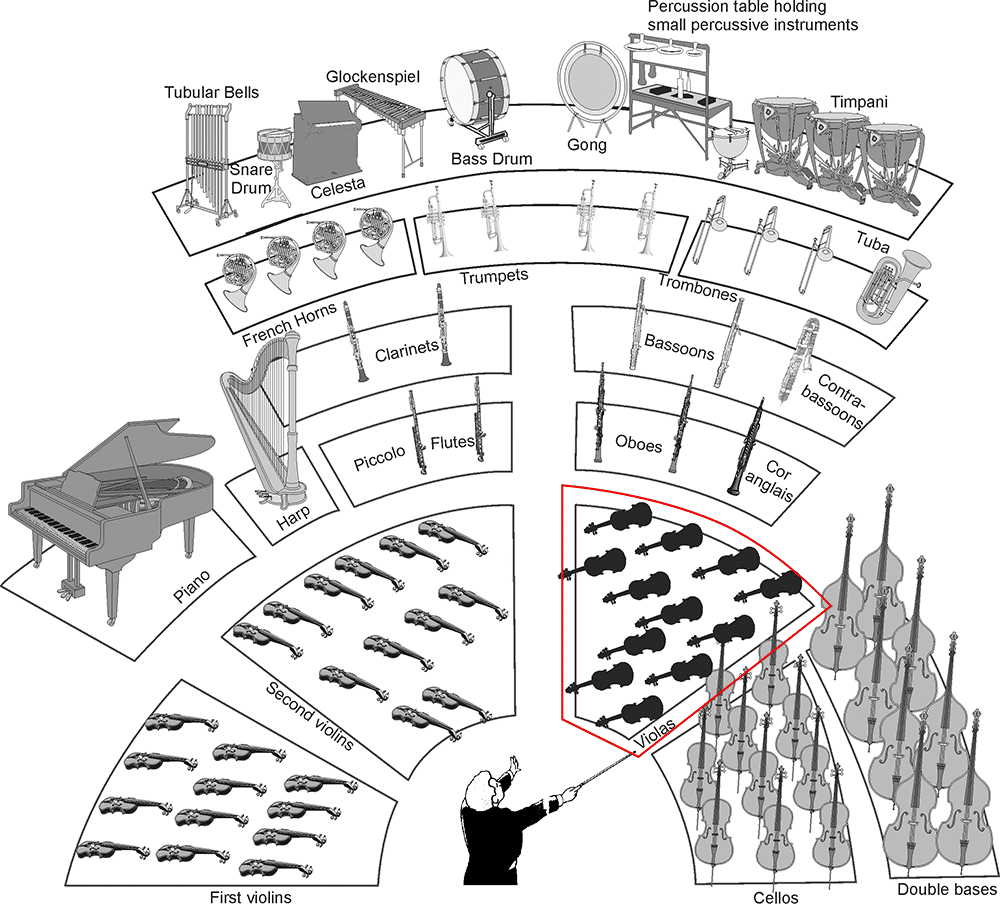 As we’ve already mentioned, violins create a haunting, mellow atmosphere, where violas sound deeper and mellower. The role of a violin (or a viola) is very important if we are to compare their sound, but it’s also pretty important to take the play style into consideration. Violins tend to dominate violas on all fields, as they’re high-pitched and produce more vibrations.

Violins have always had a much wider selection of repertoire when compared with the viola. Most string solo pieces are written for violin with cello producing a few as well. Violas on the other hand have very limited selection and most viola solos have been adopted from either violin or cello repertoire (Bach cello suites, etc).

Violins came before violas, and it’s quite obvious why their role is more important. Violins are often used in melodic parts and are very present in leads, whereas violas are most frequently used in the accompaniment parts, fills, and bridges.

Since the beginning of 20th century, composers have reinvented viola’s play style, and they’re know pretty much as versatile as violins.

There are many things that make violas and violins different, but the thin line is getting ever thinner as time passes. Professional musicians are equally interested in perfecting the art of violin playing as in viola playing. The differences will always exist but they are pretty much technical in nature.

Find Us on Social Media